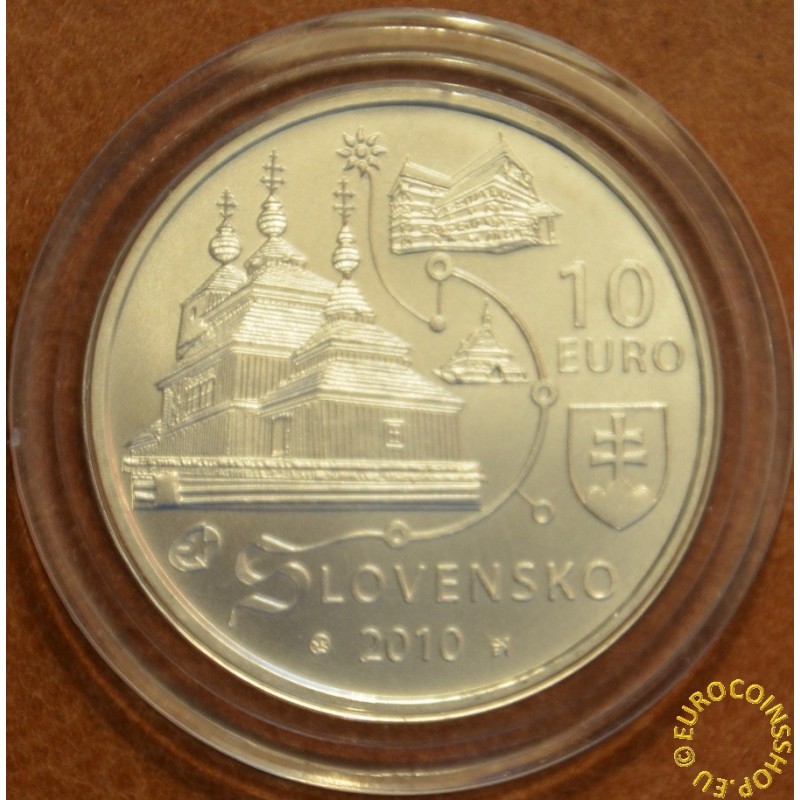 This product is no longer in stock

Depicted on the obverse on the left side of the coin field is the St. Nicolas Church in Bodružal; to the right is the Church of All Saints in Tvrdošín and above it is the Hronsek church. Near the right edge of the coin is the national emblem of the Slovak Republic, above which is the denomination 10 EURO. The name of the state SLOVENSKO, with a stylized letter "S" suggesting the road connecting individual wooden churches, is located in the lower part of the coin field. Below it is the year 2010. To the left of the letter "S" is the mark of the Europa Coin Programme represented by the European star and the euro symbol. Kremnica mint's mark MK between two dies is located on the left, and the stylized initials of the designer Mgr. art. Patrik Kovacovský, PK, is located to the right of the year.

Depicted on reverse on the right side of the coin field is the Church of St. Francis of Assisi in Hervartov and on its left the Church of St. Nicolas in Ruská Bystrá. Belov it is the writing in three lines SVETOVÉ KULTÚRNE DEDIČSTVO (World Cultural Heritage) with a stylized letter "S" suggesting the road connecting individual wooden churches. In the lower part of the coin field is the inscription DREVENÉ CHRÁMY (wooden churches).